3D printing: Is the Hype over?

What happened to 3D printing? 5 years ago 3D printing was the hot topic everyone was talking about. We were all going to have 3D printers at home in order to print parts on demand just as we have 2D printers. Many people think that because we don’t all have home 3D printers that 3D printing has gone away, is just for hobbyists, or has underperformed expectations.  In reality, 3D printing and additive manufacturing has excelled in environments which are either less visible or attractive looking to the general population.

The Gartner hype cycle is a graphical presentation that represents the maturity, adoption, and social application of specific technologies. The Gartner hype cycle (figure) can be used in conjunction with the technology adoption life cycle to gauge a state of the industry. But where does 3D printing stand? There are signs that certain areas of 3D printing are reaching the Plateau of Productivity. The Plateau of Productivity represents the beginning of mainstream adoption. As an innovation achieves full maturity and supports thousands of organizations and millions of users, the hype around it typically disappears. 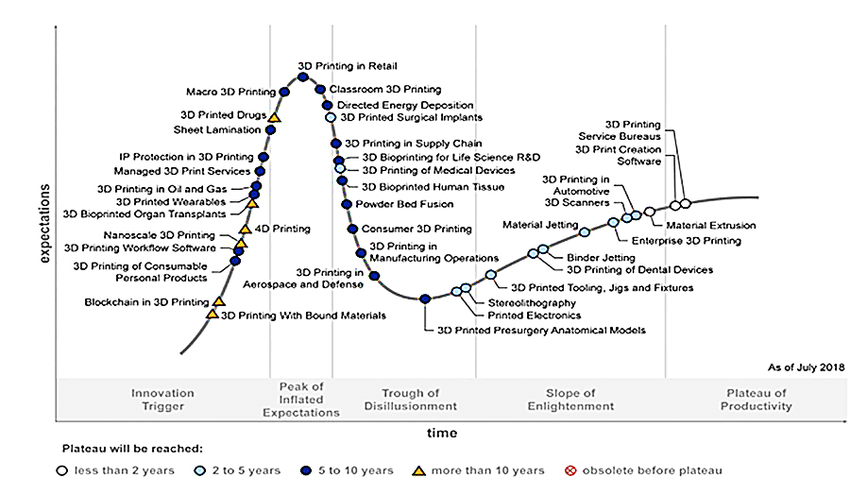 Typically, new industries go through the 4 stages of consolidation; Opening, Scale, Focus, Balance and Alliance (3). 3D printing has started to shift from the scaling stage with many companies in the industry to the focus stage. In this stage we see a few major companies in the industry buying up competitors, expanding their core business and continuing to aggressively outgrow the competition. According to Forbes 3D Systems and Stratasys together acquired no fewer than 60 companies between 2001 and 2015.

With the 3D printing industry becoming focused, approaching maturity and being widely adopted it is imperative that we consider the cybersecurity implications. It is only a matter of time before threats begin to specifically target these environments for financially-motivated crime or industrial espionage.